THE 2019 WORLD DIABETES ATLAS IS OUT! 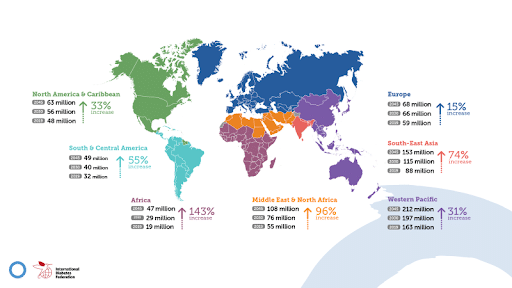 The Atlas outlines the individual, social and economic impact of diabetes globally and by region and looks at diabetes prevalence from a demographic and geographic point of view.

I must admit that I have been waiting for the 9th edition to come out for few months already. I really look forward to digging into the statistics and will be sharing some of the findings in future blog posts.

The World Diabetes Atlas was first published in 2000. Since then, the prevalence of diabetes (combining type 1 and type 2) has risen from 151 million and 463 million persons living with diabetes today. These are staggering numbers. This means that 9.3% of the global population has diabetes.  If we don’t manage to reverse this trend, the numbers are expected to reach 578 million in 2030. By 2045, there could be 700 million people living with diabetes. We must do whatever we can to prevent this prediction coming true.

It seems that most countries around the world are falling short of the target set by the World Health Organization (WHO) to halt the rise of type 2 diabetes by 2025. In many countries a national diabetes plan is still missing and at least half the world’s population lives without coverage for essential healthcare. A concerted effort by the international community and national campaigns is required to further prevent type 2 diabetes and to improve management of all types of diabetes.

This is of paramount importance as with early diagnosis and access to appropriate care, diabetes can be managed and its complications in most cases prevented.

The World Diabetes Atlas serves to outline the latest figures and projections as regards diabetes worldwide. It includes comprehensive information about what is diabetes, statistics for the different types of diabetes and prevalence of diabetes by regions. It highlights the nature of various complications associated with diabetes, such as diabetic eye and kidney disease, their prevalence and economic impact. Here is an example of the information provided in the World Diabetes Atlas:

The World Diabetes Atlas provides a solid baseline for policy makers and others involved in diabetes management. Only by acknowledging and understanding the facts and the numbers regarding diabetes worldwide, will we be able to make a significant dent in preventing and improving the lives of those living with diabetes in the world.