The World Health Organization (WHO) lists insulin as one of the world’s essential medicines. For people with type 1 diabetes it is necessary to take insulin as without insulin, sugar in the blood accumulates, which can lead to acute complications such as diabetic retinopathy, one of the leading causes of blindness and, in the worst case, death. However, according to a 2017 study led by Health Action International, half of the estimated 100 million people who need insulin globally do not have reliable access, meaning either they can’t afford insulin or it’s not available. Costs for insulin have risen so much in recent years that almost half of people with type 1 diabetes have temporarily skipped taking their insulin, according to a survey from 2018. 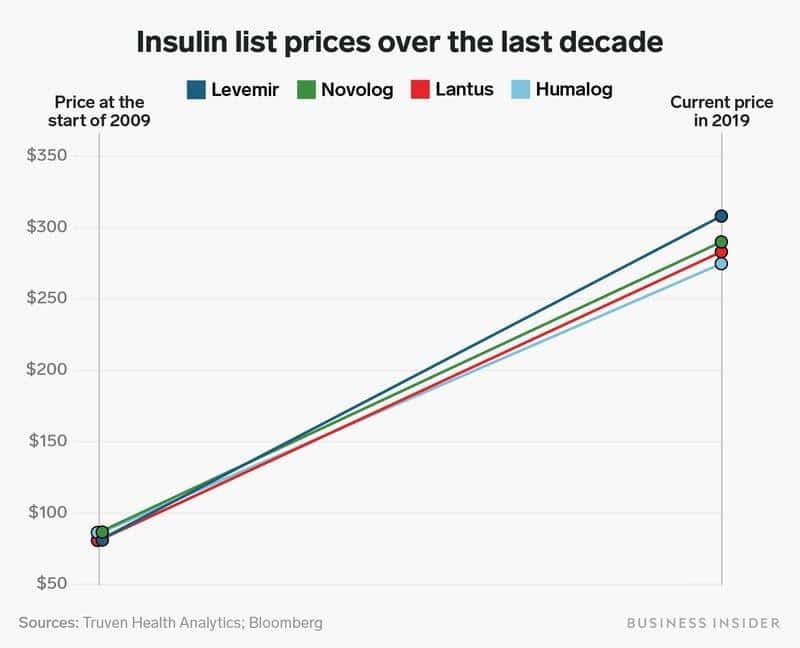 Rising insulin prices are in some cases forcing people living with diabetes to choose between purchasing their medications or paying for other necessities, thereby exposing them to serious short- and long-term health consequences.  In the United States (US), the skyrocketing cost of insulin has become a serious challenge. In the last decade, the US list prices of common types of insulin have roughly tripled, according to one study.

T1International, an advocacy group, found that more than a quarter of people with type 1 diabetes in the US rationed their insulin last year, the highest percentage of insulin rationing of any high-income country surveyed. Some 24% asked their doctor for a lower-cost medication, according to the Centers for Disease Control and Prevention. News of Americans traveling to Canada to buy insulin for a fraction of its cost at home are spreading.

In many European countries, laws require public healthcare plans to cap out-of-pocket health care costs, and to cover all medically necessary treatment, including insulin. This means that when people with type 1 diabetes hit the limit, the plan pays the rest. In Germany and the United Kingdom, governments actively negotiate prescription drug prices, which is believed to have helped drive down the price of insulin and holding consumer costs in check.

Globally, limited market competition keeps the prices high, according to Médecins Sans Frontières, which has been campaigning to improve access to the treatment. “You have the three big pharmaceutical companies that dominate the global insulin market, which is unprecedented when you look at how medicine markets work around the world,” says Christa Cepuch, a regional pharmacist for MSF.

The WHO is also working to address this problem. Last year, it launched a pilot program to boost the availability of insulin worldwide. The idea is to work with insulin manufacturers to increase global supply and potentially drive down the price of the treatment. This developing world program centers on a process called “prequalification,” which the WHO developed in 2001. Seven pharmaceutical companies have already shown interest in participating in the pilot program.

In December 2019, the US FDA announced that the agency would reclassify insulin as a “biological product” by 2020, in what the FDA commissioner called a “watershed moment for insulin”. These so-called biologics will then have an easier pathway to approval than before, promoting the development of “products that are biosimilar to, or interchangeable with” existing insulin. More recently it was announced that a new Medicare prescription plan would cap insulin cost at $35 a month starting in 2021 for older adults.

All these efforts to make insulin more widely available and affordable will hopefully result in more people living with type 1 diabetes around the world getting the medication they need to survive.